Mushrooms are edible fungus known for their different health benefits. Though they’re bizarre-looking and grow virtually anywhere, they have become high in demand and supply. Since the 1600s, mushrooms have become quite famous and are cultivated for health purposes.

People also use them as spices to add flavor and aroma to dishes.

Lion’s mane is another edible mushroom known for its medicinal qualities. It has fuzzy spines and gives off a furry look. It is often found in places like North America, Europe, and Asia. Collectors usually find this mushroom between late summer and early fall. Lion’s mane is commonly found on dead or dying logs of wood.

Interestingly, it is known for its ability to regenerate nerve tissues in the body. It has the flavor and texture of a lobster or crab. It may not be as expensive as others, but it is one of the most expensive mushrooms in the world. The cost ranges from $18 – $36 per pound. 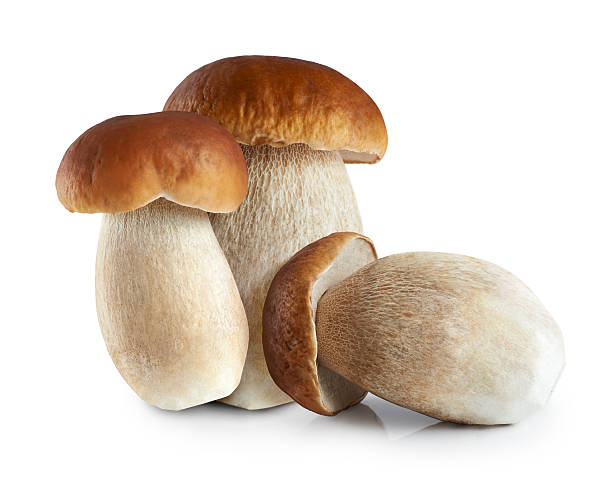 Porcini mushroom is the ninth most expensive mushroom on this list. Known commonly as Penny Bun fungus, it is commonly found across Asia, Europe, and North America. This mushroom contains several nutritional qualities, which include carbohydrates, protein, and fat.

This priced mushroom is common in both French and Italian cuisines. They grow in pine forests at the base of trees. They are sold both fresh and dried. You can either make them as a side dish, add them to your pasta or use them as flavors for your stew.

Eniko mushroom is also known as Lily mushroom. It is famous for its flavored and aromatic nature that adds spice to Japanese cuisines. Enokitake grows naturally on the stumps of the Chinese hackberry tree.

It is usually collected from September to March during the winter season. This mushroom comes in two forms; the cultivated and the wild ones. The cultivated enoki mushroom has a slimy and soft texture, while the wild one is tough. Enokitake costs $108 to $364.59 per pound.

Chanterelle mushroom is a golden-colored mushroom that is known for its spicy flavor. Just like the Gucci mushroom, it grows in coniferous forests close to herbs. These mushrooms grow under special conditions like heavy rainfall followed by days of heat and humidity, usually during spring.

Unlike some mushrooms that can be eaten fresh, Chanterelle mushrooms can only be eaten when dried. Though it comes in different colors, the golden-colored mushroom is the most sought after. It costs about $225 per pound of dried mushroom. 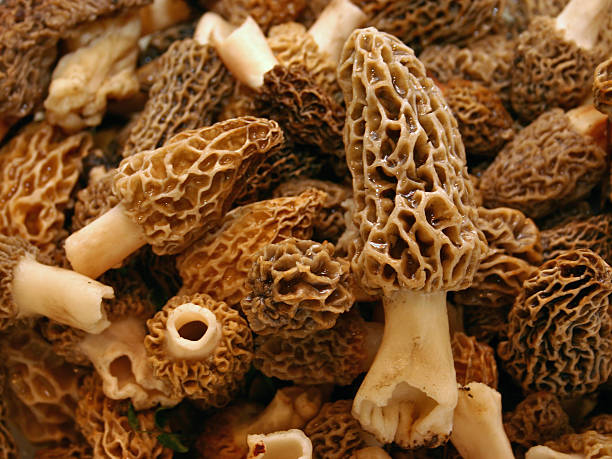 Morels come with ruffled sponge-like heads, quite different from other kinds of mushrooms. They also look like the human brain. Morels are pretty seasonal, one reason why they are a little bit pricey and hard to find. But they are delicious and come with a great aroma and flavor.

Their cost ranges from $160 to $254 per pound for dried morels. Fresh morels are a little cheaper.

Read More: Most Expensive Sapphires in the World. 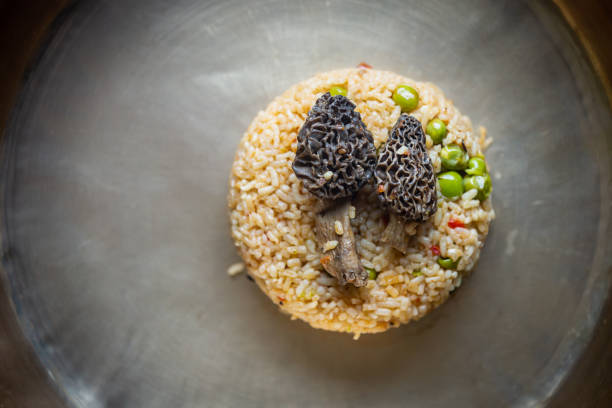 This is another expensive mushroom in the market. Known for its spongy, honey-combed head, it grows in conifer forests in temperate regions and the foothills of the Himalayas in Asia. Gucci mushrooms are pale yellow with large pits and ridges on the surface.

Like most of these mushrooms listed here, it is not cultivated commercially and can only be collected in the woods; this makes it all the more expensive. Gucci mushroom is quite delicious and adds flavor to your dish, giving you a savory taste.

What’s more, it is edible and has many health benefits. Most collectors harvest this mushroom between March and May, which they dry before taking them to the market. It is one of the most expensive mushrooms in the world and is priced at $402.97. 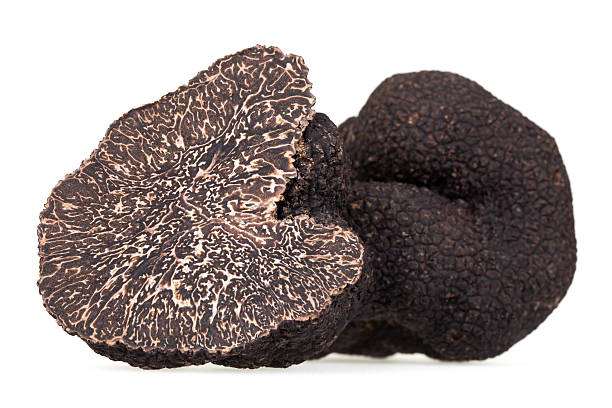 Like the European white truffles, black truffles are also expensive mushrooms that grow across Europe. Also known as summer truffle, black truffle has a wild origin. It usually grows from mid-November to April.

Interestingly, the price of this mushroom is dependent on the quality. For some, a kilo is worth 1300 euros. There are different species of black truffles that come in several forms. Some of them include the Burgundy black truffles and the winter black truffles.

Black truffles’ cost ranges from $1000 to $2000 per pound. This price depends mainly on the season it could be higher. These mushrooms require special conditions to grow healthy and are pretty rare to find.

Black truffles are known for the distinct aroma,flavor or taste they produce. They are also quite pricey. When black truffles are recently harvested from the field and have field soil all over them, they should be dried before use. 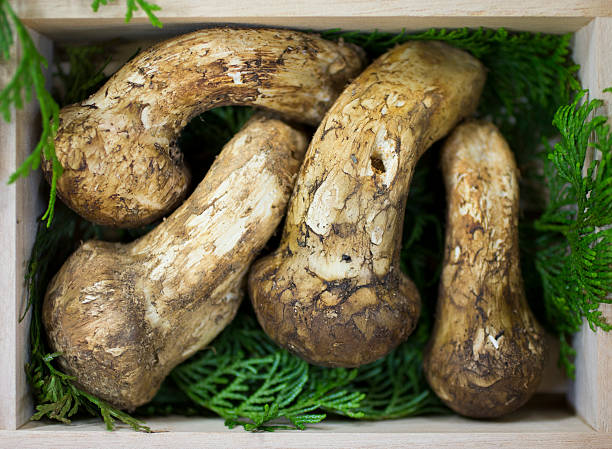 Matsutake mushroom is known for its association with the autumn season. It grows under red pine trees in the Tamba region of Japan, particularly near Kyoto.

Matsutake is considered a delicacy that is popular in Japanese cuisine. It is pretty smallish and easily recognizable for its pale color.

When you use this mushroom for cooking, it gives you a spicy and fruity flavor and aroma. Due to the destruction of the red pine forest by insects, this mushroom is rare to find and is considered an endangered species.

What’s more, cultivation methods have also proved unsuccessful. This has increased the rarity of this mushroom. It is this rare nature that has made it incredibly expensive. The price of Matsutake mushroom ranges from $1000 – $2000 per pound.

This is another most expensive mushroom. The European white truffle is quite common throughout Europe. It grows underground, near the base of oak trees, and is quite rare. This mushroom is incredibly expensive, costing about $3600.

The European White Truffle mushroom does not precisely have any cultivation techniques; hence its price remains largely high, and collectors still find it hard to harvest them. They are usually considered one of the rarest food products on earth. Original Truffles are usually obtained from France and Italy.

This is the most expensive mushroom in the world. This mushroom, known as caterpillar fungus, is formed under the soil through ghost moth caterpillars. The parasite fungus uses its tiny pores that are airborne to infect the caterpillar.

After this, it then feeds on the caterpillar alive from the inside until the caterpillar dies. When this happens, the fungus then begins its growth process. This mushroom is rare but easy to harvest. The growth altitudes range from 3000 – 5000 meters.

People who can harvest this mushroom are accorded respect from family and friends. Caterpillar Fungus is popular around Asia as Yartsa Gunbu, meaning “summer grass, winter worm.” This mushroom goes for $2000 per ounce and $63000 per pound, and it is worth the price.

Read More: Most Expensive Pocket Knives in the World

Why mushrooms are so expensive

Not all edible mushrooms are expensive. However, the quite expensive ones in the world are rare and hard to cultivate. Apart from being expensive, these mushrooms are highly nutritious and delicious, and mushroom lovers will pay just about anything to access them.

Mushrooms are also expensive due to the high supply and demand for them. Since they are sensitive and hard to mass-produce, it makes it difficult to cultivate them. These are some of the reasons why these mushrooms are expensive.

Edible mushrooms are suitable for our consumption. Apart from the health and nutritional benefits, they also add flavor to our meal. What’s more, they are delicious, aromatic, and unique. There are so many mushrooms in the world, but these are some of the best ones.

They include the Enoki mushroom, oyster, morels, white button mushroom, porcini, and chanterelles.

Mushrooms are delicious and even highly beneficial to your health. They are low in calories and are rich sources of protein, fiber, and antioxidants. They are also excellent sources of copper, magnesium, selenium, and phosphorus.

If you are a lover of these edible fungi, you can attest to how important they are. They may be pricey but they are true delicacies. Interestingly, they are delicious, nutritious and chefs all over the world serve them as unique cuisines. For years, mushrooms have been expensive and might stay that way for a while.

Whether you are a farmer or not, there’s no denying that tractors are essential machines that help in our daily farm activities. It is used in the construction…

For most people, engagement rings are symbols of love and union. For some, it is more than that. It is a symbol of affluence, status, glamour, and, most…