If you’re a sucker for cool wristwatches, you may have heard of the most expensive Richard Mille watches.

Produced by the Richard Mille brand, these watches are renowned for their aesthetic look, visible movements, spline line, and characteristic cases. What’s more, they are produced with the finest of materials.

You can instantly recognize a Richard Mille watch when you see one.

The design and luxury of these watches afford to make them different and very expensive. Interestingly, they have been worn by some celebrities, businessmen, and even your favorite sports stars. Here are the most expensive Richard Mille Watches.

It is an artistic feat with a blend of fine jewelry and fine watchmaking. In fact, this watch is designed entirely with diamond studs and black sapphire, giving it a friendly appearance and an incredible appeal.

Made with a leather strap, the RM 26-01 Panda is an offshoot of the RM 26 collection. It is one of the most expensive Richard Mille watches on this list. It is equipped with a base plate produced by black onyx.

This timepiece absorbs negative energy and brings emotional stability to the wearer. It comes in a limited edition of 30 pieces worth $700,000. 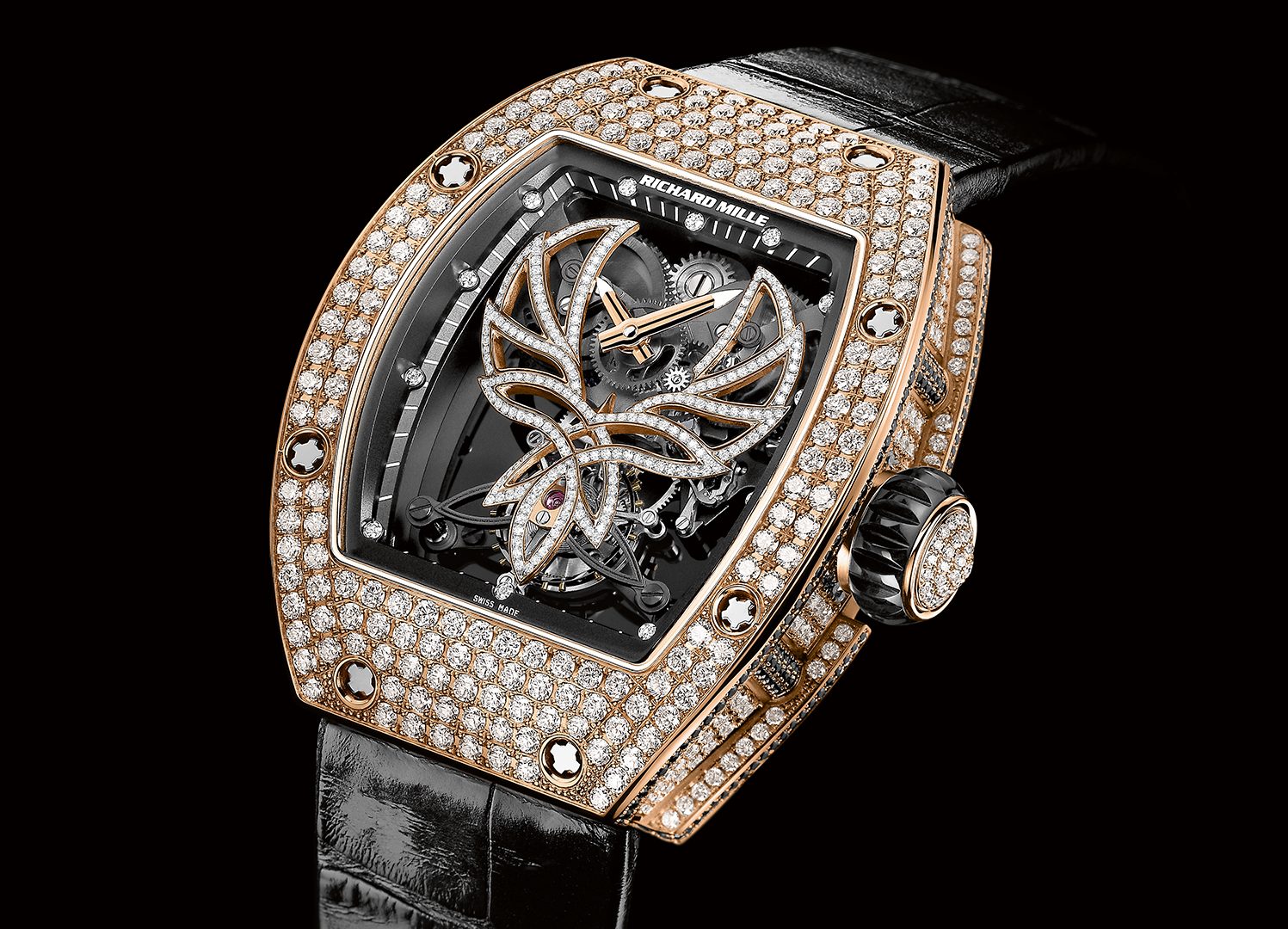 Designed from a collaboration between the movie star Michelle Yeoh and Richard Mille, this Phoenix watch is a symbolic timepiece. It features a tiger and dragon clutched to the tourbillon movement. The tiger and dragon are a symbol of Asian culture.

The RM 051 also features a power reserve of 48 hours. The grade 5 titanium movement includes a torque limiting crown protecting the watch from overwinding. This piece was created from red gold and is a limited edition of 20 pieces. 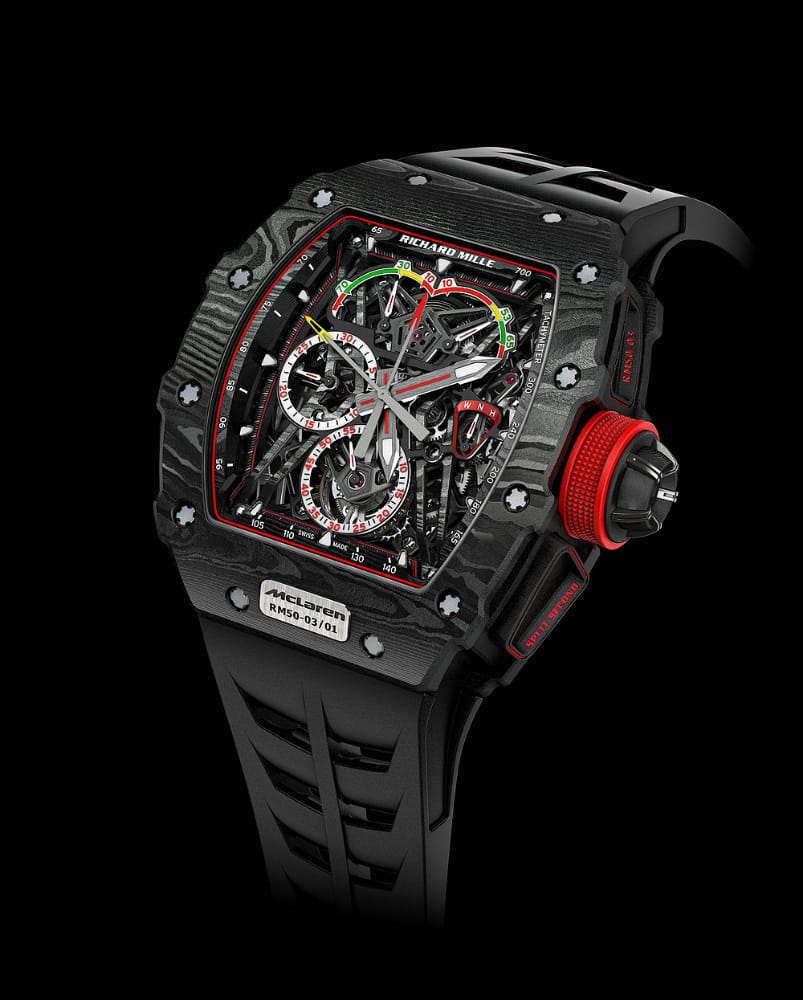 The RM 50-03 is the ninth most expensive Richard Mille watch on this list. Like other watches from this brand, this model is exclusive and has a wow factor.

This model was produced in a limited edition of 70 timepieces. It was produced from a collaboration with the formula one constructor McLaren. Taking the eighth spot on our list of most expensive Richard Mille watches, the RM 018 Boucheron goes for an impressive $1 million.

This timepiece is known for its unique nature. It is an offshoot of a collaboration between the famous jeweler of Place Vendome and Richard Mille to celebrate the founding of the Boucheron.

The RM 018 is designed with precious stones and embellished with Boucheron. It is a masterpiece hence its high price.

The RM 031 is what we call a blend of Orthodox and contemporary. It combines both watchmaking tradition with pioneering concepts. In fact, the Richard Mille brand produced a consistent mechanical caliber with this model.

Being one of the most expensive Richard Mille watches, this model is the first edition of the RM 31 collection. It features a manual winding movement with hours, minutes, small seconds, and function indicators, as well as a high-performance chronometer.

This version comes in a limited edition of 10 pieces. Only those willing to let go of $1.1 million can afford this wristwatch. The barrel and balance bridges are made from grade 5 titanium. 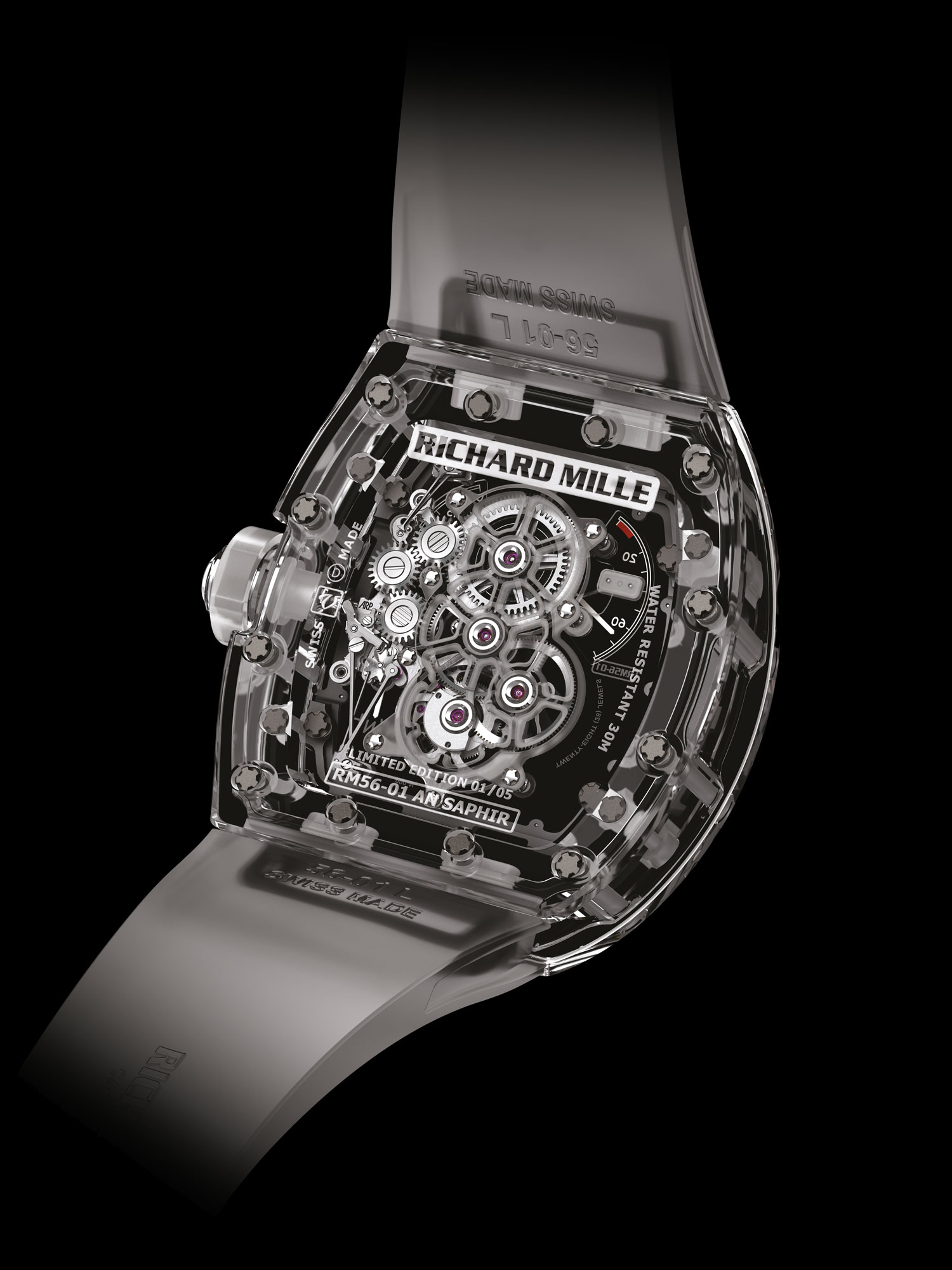 The RM 56-01, just like the other sapphire models of the Richard Mille brand, is known for its exclusive unique nature, a characterization of extraordinary transparent movement.

Made from titanium and sapphire crystal, this timepiece is immune to wear and temperature variations.

The RM 56-01 caliber uses a crystal breastplate that supports the entire manual winding tourbillon movement. One exciting feature of this watch model is that it is transparent and allows as much light to penetrate it.

This watch has a limited edition of 5 pieces making it another rare Richard Mille wristwatch. It is worth $1.85 million. Richard Mille Tourbillon RM 56-02 sapphire is another most expensive Richard Mille watch. Costing over $2 million, this rare piece is known for its extraordinary combination of tripartite sapphire case and cabled movement design.

Being another model in the RM 56 collection, his timepiece features a base plate made from grade 5 titanium. The outer case is made with anti-glare protection on the front and back bezels, making this case waterproof to about 30 meters.

The Richard Mille RM 56-02 tourbillon was designed in a limited series of 10 models and manufactured with pure sapphire. Interestingly, a transparent suspended cable movement developed in a single braided cable of 0.35mm thickness.

It also features a manual winding tourbillon movement with hours and minutes. The sapphire used for this watch is transparent and has a hardness of 1800 Vickers. The entire watch case with the base plate suspended is made of sapphire.

Interestingly, the RM 56-02 is a crowning achievement of the sapphire family. It is scratch-resistant and is worth an astounding $2.2 million. 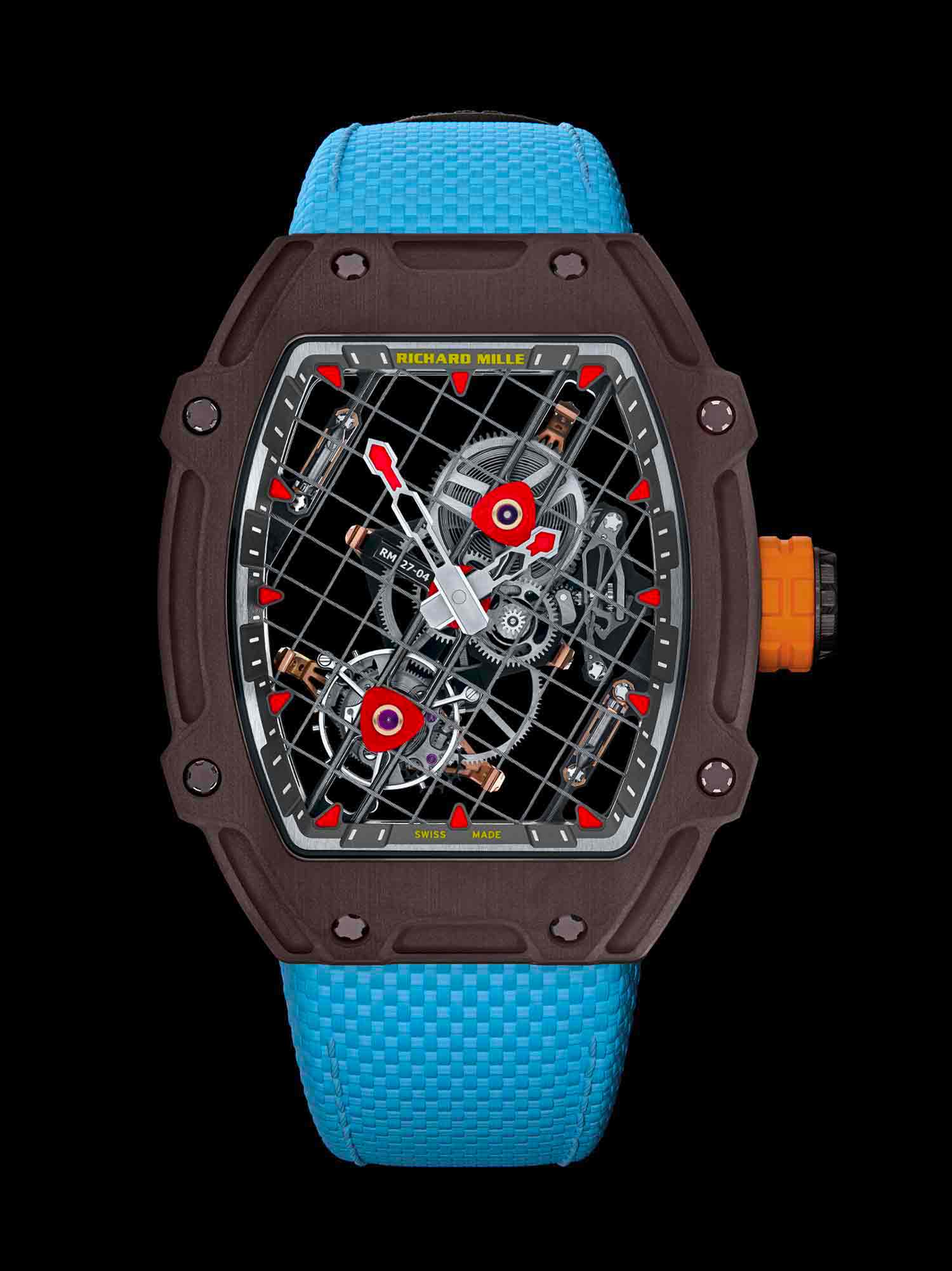 This Rafael Nadal RM 27-04 Tourbillon wristwatch is another most expensive Richard Mille watch known for its sporty nature. It weighs a whopping 30 grams, including the straps. Interestingly, it resists the acceleration of more than 12,000 gs.

As one of the record-breaking Richard Mille watches, this timepiece is known for its accuracy and resistance to shock. In fact, this model is more unique and groundbreaking than other RM 27 models.

RM 27 tourbillon was borne out of a ten-year partnership celebration between Richard Mille and the famous tennis player Rafael Nadal. It features a steel cable tensioner positioned at five o’clock, typically the same as the string on a tennis racket.

Interestingly, this model has a limited edition of 50 watches. This means if you’re interested in owning one of these, you’d have to come up with a staggering $2.8 million real quick. One of the popular celebrities that own this unique timepiece is Drake. 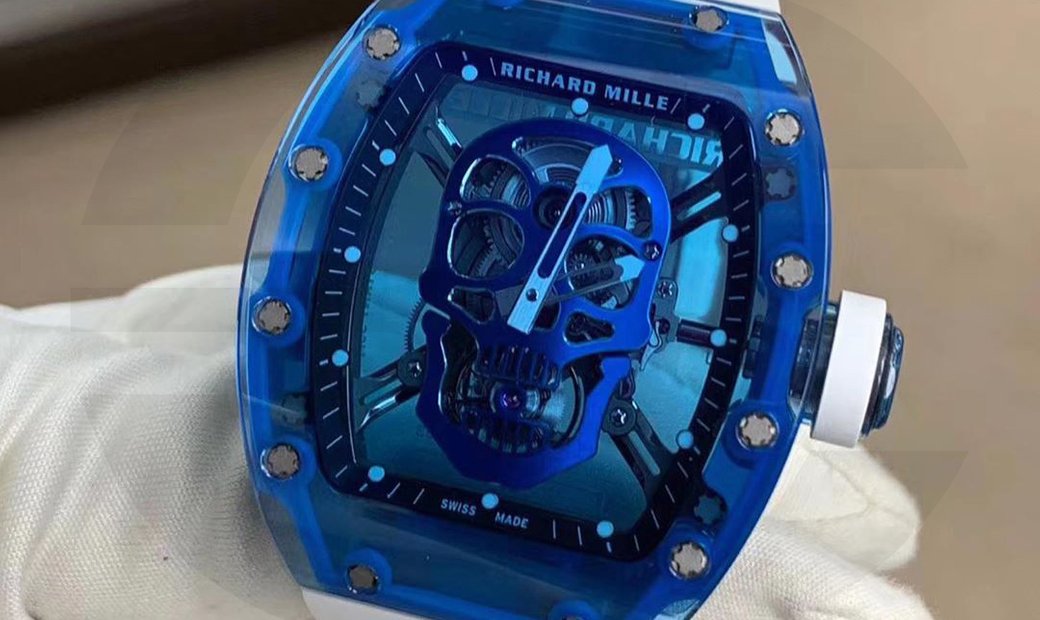 Richard Mille Skull RM 52-04 is a rare limited edition of the RM 52 collection. It features the iconic skull design and a manual winding tourbillon movement. The skull design is a recognizable symbol that has become accustomed to the Richard Mille brand.

This watch is crafted from a carbon NTPT, grade 5 titanium, and a hand-sculpted skull. The tourbillon watch is, in fact, one of the rarest timepieces of the Richard Mille watch collections.

This model is not your average skull watch. It features the signature tonneau shape and is water-resistant up to 50 meters.

It has a ceramic case, and the bracelet is made with rubber strap material. The RM 52-04 watch embodies style aesthetics and high performance. Like most rare Richard Mille watches, there are only three pieces of this limited edition.

READ MORE: How Much Cash Do Billionaires Have? 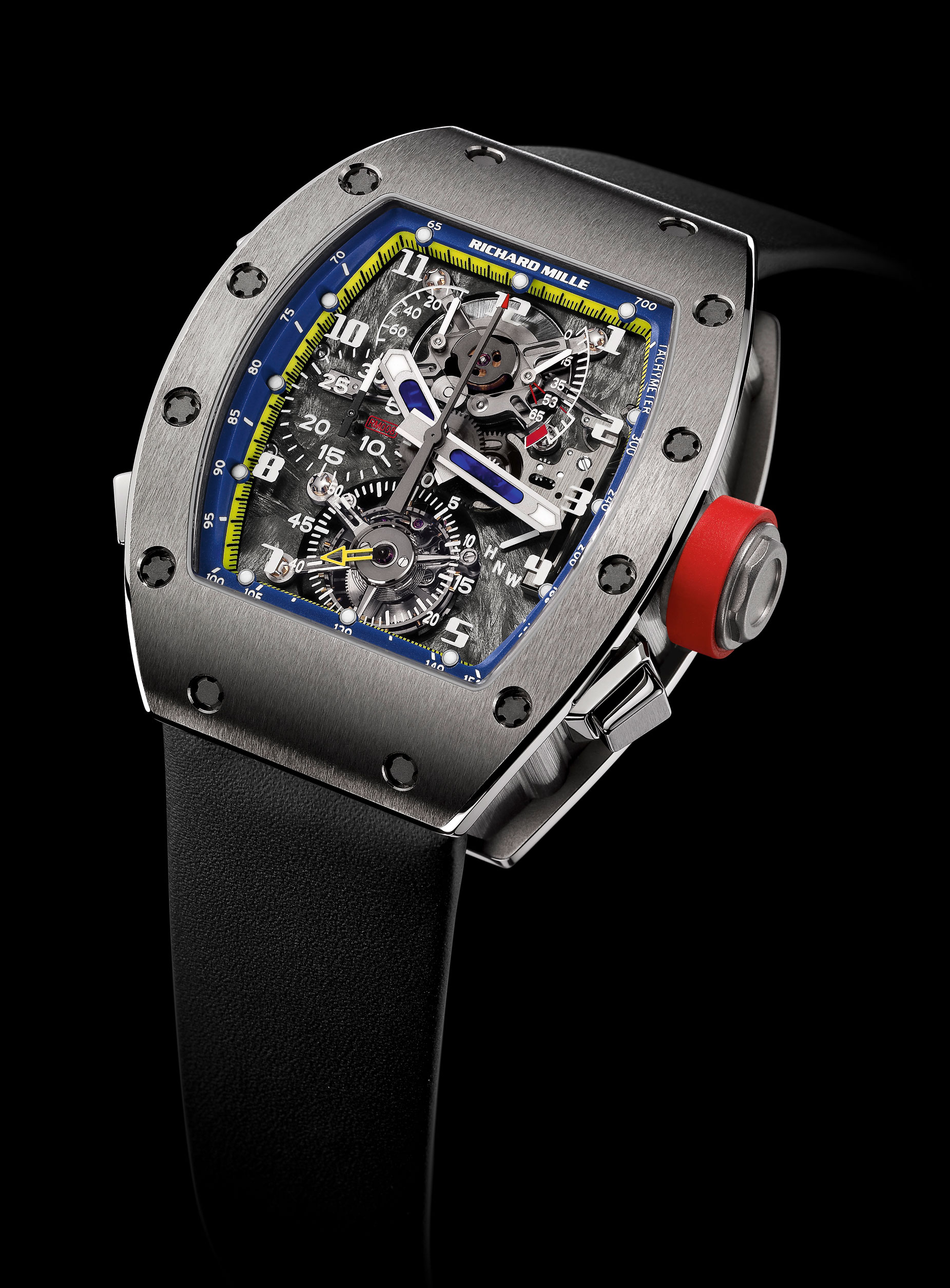 This is the most expensive Richard Mille watch on this list. Costing over $7 million, the Richard Mille RM 008 Tourbillon is one timepiece that gives you the sports car effect.

As a 2010 limited edition piece of the RM 008, it has the functionality of the RM 004, incorporating the split-seconds chronograph features of the RM 004 model but with greater. Since Richard Mille creation in 2003, this timepiece has become the most complicated in the collection.

The RM 008 tourbillon features a manual winding tourbillon movement, a 30-minute totalizer, a power-reserve, a torque function indicator, and a split-second chronograph. It also features technological advances in carbon nanofiber and is made with a rubber strap.

Interestingly, this intricate limited edition one timepiece has a visually striking look with neon yellow detail and a carbon case. Its hand-winding manual makes it eye-catchy for watch enthusiasts, affluent investors, and motorist fans. If you’re looking to get this exclusive and hardly seen Richard Mille watch, you would have to part with a little above $7 million.

Richard Mille watches are known for their ultra-modern display of wow factors; unique, chic, comfortable, accurate, and lightweight. These timepieces give accuracy in style and design. In fact, for lovers of sports cars or anything sports, this wristwatch meets the dream because it gives them a sports car on the wrist.

Diamonds are precious gemstones known for their rarity and value. They are so precious that some are even tagged as priceless. Their exquisite nature makes them desirable to…

Mushrooms are edible fungus known for their different health benefits. Though they’re bizarre-looking and grow virtually anywhere, they have become high in demand and supply. Since the 1600s,…

Can you achieve full facial beauty without an earring? You might be tempted to argue that it is possible to achieve it: and yes, it might be possible….