Most people cherish the Ruby stone. It is a beautiful gemstone used to create other beautiful expensive things ranging from bags, clothes, necklaces, and so on. Ruby is a gorgeous pink to a blood-red gemstone. It has other varieties of gem quality called sapphires. A Ruby is one of the other precious stones ranging from sapphire, emerald, diamonds, and amethyst among others.

Rubies are of different kinds and they cost more when compared. Although, most of the Rubies are not naturally expensive. The process of auctioning the rubies increased the price of the precious stone. In this article, you get to know about Rubies that cost a fortune to be acquired.

Here is the list of the 10 most expensive Rubies in the world:

A Ruby and diamond ring makes it to number ten on the list. A Ruby ring is usually very attractive especially when it matches your dress or bag. This ring stands out from other Ruby rings used for fashion. It matches well with any metal like yellow, white gold, platinum, and silver.

This ruby ring cost a whopping 3,450,718 million dollars when it was sold with a Burmese center ruby of 30.20 carats. This qualifies Ruby as one of the most expensive Rubies in the world. Rubies are jewels and there is no doubt that jewels cost a lot. In 2011, the jewel was acquired at Christie’s in Geneva. The Harry Winston Ruby and diamond ring are some of the most expensive jewels in the world. In most cases, people question themselves on why they should spend a lot on a piece of jewelry when there are other things to buy. Such a claim is false because when you see this ring, the price is worth it.

In 2013, the ring was sold by Christie’s Hong Kong for 3,935,105 million dollars which can be approximated to 4 million dollars. The ruby weighs 8.99 carats. The ruby has interesting characteristics that bring out its beauty. Its color is a bright red color which is enhanced with an excellent purity outlook.

READ MORE: Top 10 Most Expensive Rugs in the World. 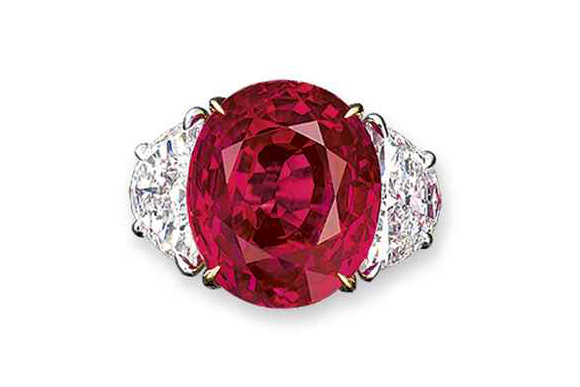 You must have been wondering why the ruby on number eight is worth 6 million dollars. Don’t be anxious yet, there are other minds blowing Rubies in the countdown. Most people don’t know the worth of some pieces of jewelry when they are put on one except for research. The regal Ruby is a Burmese ruby and it comprises 13.21 carats.

The Ruby was mounted into a ring made with diamonds, which has 18 carats of white and yellow gold. Isn’t this beautiful? The ruby costs 451,738 per carat. The ruby is a bright and elegant red jewel. In November 2013, the ruby was sold for 5,967,465 at Christie’s in Hong Kong. The Queen of Burma Ruby is an exceptional treasure that is worth over 6 million dollars. It is a Burmese oval ruby that consists of 23.66 carats. The Ruby was mounted on a platinum ring by Cartier in 1937. In November 2014, the ruby was sold for 6,084,559 dollars at Christie’s in Geneva which makes it one of the most expensive Rubies in the world.

The gemstone has a pink-red color and high transparency to its beautiful cut. The Ruby has a very flashy, saturated, and shiny look that makes you know that this is a treasure and not just an ordinary ring. The history of the ruby itself is traced to 1937 when it was sold to the Maharaja of Kutch.

It is a Burmese ruby and it comprises 32.08 carats. The ruby ring has a cushion cut and has a pigeon blood color. The ruby ring got its name from the owner. Chaumet the Jeweler mounted the ruby in a diamond ring for Luz Mila Patiño. Today, this ruby ring is one of the most expensive Rubies in the world. Any ruby ring you see passes a message to anyone. It suggests wealth and prosperity and this is because an ordinary person cannot afford such an expensive jewel. The wealthy ones can purchase because they admire it and will want to own one. It is a Cartier Ring and it is one of the most prestigious jewelry houses in the world. The Cartier Ring in Rubies and diamonds were made with only top-notch materials and real rubies.

In Sotheby’s auction in Hong Kong, which was a jewelry auction organized by them on April 7, 2014, the Burmese Mogok ruby was sold for 7,379,953 dollars. The ruby is made up of 29.62 carats and each carat cost 249,154. This treasure is currently the fifth most expensive ruby in the world.

The Carter Pin in Ruby and Diamond is the fourth most expensive Ruby in the world. This treasure is made up of Burmese ruby of 10.10 carats. When the ruby diamond was sold back in November 2014 at Christie’s, it cost the buyer 8, 428,127 dollars.

This ruby is extremely rare and it shows affluence and wealth. It has a very beautiful outlook that speaks for it and makes people know it is worth 8 million dollars. It is made from natural materials and precious stones set in platinum and accompanied by diamonds.

The Graff Ruby is the third most expensive ruby in the world as it costs a whopping 8.4 million dollars. This beautiful piece of jewelry was created with 10.10 carats and a Burmese ruby. It costs 834,468 dollars per carat while the whole Ruby was sold for 8,428,127 dollars at Christie’s in November 2014 to be precise.

The ruby emanated from the Mogok valley in Burma. It is highly recognized for its richness in precious stones. It has a very beautiful design and feels made from the best natural materials. The Crimson Flame Ruby is the second most expensive ruby in the world which cost 18.3 million dollars. This Ruby is around 10 million dollars more expensive than the Graff Ruby which is the third most expensive. The Ruby is a Burmese pigeon blood precious stone made up of 15.04 carats and mounted on a ring placed at the center of a crown made with diamonds.

On December 1st, 2015 at the Christie’s during a magnificent sale of jewels, 18,382,385 dollars was paid to acquire this precious stone. The initial price is between 10 to 15 million dollars, but since it was sold in an auction the price is bound to increase due to competition from the buyers.

READ MORE: 10 Most Expensive Condos in the World.

Finally, The Sunrise Ruby is the most expensive ruby in the world and it costs over 30 million dollars. This is quite interesting because 30 million dollars is incredibly enormous and it can buy other expensive kinds of stuff and will still have enough money. Since Rubies are outstanding, the buyer didn’t mind acquiring them after reimbursing such an amount of money.

Apart from being the Most valuable Ruby, it is also the most expensive colored gemstone in the world. The precious stone was sold by Sotheby’s in the may 2015 Geneva auction which starred many people from around the world. At the end of the auction, a whopping 30.4 million dollars was paid before the treasure could be taken away.

In conclusion, this is the list of the most expensive ruby in the world and they have certain reasons why they are that valuable. Some were made with natural precious gems that cost a lot. However, not all are naturally expensive but their sale in auction made them more expensive. Don’t be flabbergasted seeing a Ruby cost 30 million dollars.